One year ago today

Grab a few enthusiastic XMPP developers, a neat lightweight scripting language and put them together, what do you get?

One year ago today we released the first version of Prosody. The early versions worked (kind of), and were quite feature-packed for initial releases now that I look back. The second release was made before the month’s end, and fixed a range of open issues. By the third release we had switched licenses from GPL to MIT, to give less restriction on what could be done with our code.

Fast-forward to today and we’ve just made our 11th release, are hard working on the 12th, and are very excited about the coming months.

I’d like to thank everyone who has contributed to Prosody, both with source code and with a voice in our (very busy) community.

In particular thanks to albert, our unofficial release driver (and whom we have to thank for making sure we supported IDNA correctly in our first release). Also to Florian Thießen (no, I can’t pronounce that either), who became the first person to run a public XMPP service using Prosody.

Thanks to Enrico Tassi and Sergei Golovan who helped with Debian packaging and getting Prosody into Debian, as well as all our packagers for other platforms.

Also deserving a special mention are Paul Aurich, who we have to thank for giving the s2s TLS code his magic touch, and Thilo Cestonaro and Florian Zeitz who both work hard developing plugins in our prosody-modules project.

Ohloh, the open-source software tracker, shows some interesting statistics from our first year of development. Take a look at these graphs to see our activity over the months, and optionally compare to other open-source projects.

Finally, the moment it all began, captured in a screenshot: 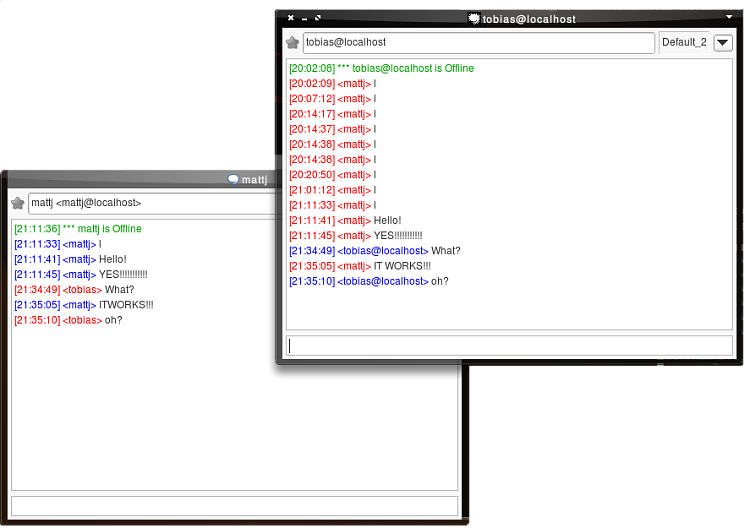