Yay! After what turned into a rather long testing period, we’re ready to announce the release of Prosody 0.6.0.

Below you will find the download links, right after a round-up of the new features in this version. 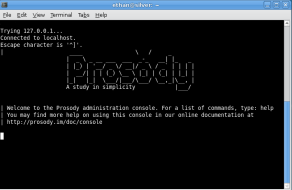 While the console is nothing new, 0.6 sees some new commands added. You can now easily reload the configuration file, and add/remove virtual hosts without restarting. We’ve also added a command to shut down the server gracefully, closing all connections with a specified message first.

Multi-user chatrooms are great, but ever since IRC they’ve always been plagued by people with multiple nicknames like “MattJ_work” and “MattJ_laptop”. This new feature in Prosody allows multiple connections from the same account to all share the same nickname in the chatroom. To other users in the room it simply looks like a single ordinary user.

This feature is brand new, and still under development… for example changing nickname while part of a multi-session group is disabled for now while we work on making it function smoothly (it’s not trivial!). Feedback is always welcome, of course.

Other improvements in MUC include support for persistent rooms, configuration and other admin controls. Room creation can also now be restricted to service admins.

Prosody now has a mod_compression to enable compression of client-to-server streams. Combined with the automatic roster versioning, this makes for some very desirable bandwidth savings, very useful for mobile connections.

More info on enabling compression can be found in the Prosody documentation.

Prosody can now make encrypted connections to other servers that support TLS for server-to-server connections. If you and your contact are both using secure connections between your client and server, and the link between the servers is encrypted, this means your messages will never pass over the network in the clear.

Up until now Prosody only accepted configuration of a single certificate for all connections, though now you can configure a certificate for each virtual host the server is hosting.

For some time we have had an ejabberd2prosody tool available to help convert ejabberd database dumps to Prosody’s own format. The trouble for some people was that this only worked with ejabberd’s built-in database, ‘Mnesia’.

Available now is a new tool, ejabberdsql2prosody, that takes a MySQL dump file and converts it to Prosody’s own file format.

In the works is a fully-fledged XEP-0227 convertor, which Matthew has been developing as part of the jabber.org migration.

A few users complained to us that when they join chatrooms hosted on an ejabberd server that other users are unable to see their vcard or avatar. This is caused by the fact that ejabberd’s MUC implementation sends vcard requests to the user’s client, instead of their server (where it is stored). This didn’t affect ejabberd users because ejabberd intercepts the requests and replies, however this behaviour is non-standard and doesn’t conform to XMPP’s routing rules.

The new Prosody configuration option ‘vcard_compatibility’ can be used to enable this non-standard behaviour in Prosody. Hopefully this option can be removed in the future when ejabberd is fixed.

Update: This version has been replaced by 0.6.1, please see Prosody 0.6.1 Released for more information.